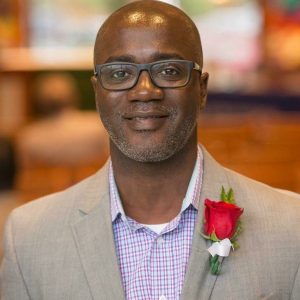 Rev. Yehiel Curry was born, raised and still resides on the south side of Chicago with his wife of 23 years, Lashonda and their three daughters: Shemiah, Ashirah, and Shekinah. His first involvement with the ordained ministry was an uncommon one. Similarly, the congregation he serves had an uncommon beginning as well. Shekinah Chapel Lutheran Church in Riverdale, Illinois, grew from a youth development and mentoring program for young African-American men called, Safe in My Brothers Arms (SIMBA), on the south side of Chicago.
Yehiel Curry attended Lewis University in Romeoville, Illinois, where he received a B.A. in Psychology and a minor in Secondary Education in 1995. After four years in the social service field, Yehiel Curry spent another four years teaching 6th grade Social Studies at Doolittle East Middle School, a Chicago Public School nestled in the Ida B. Wells public housing projects.

In 1997, he was part of a team that was helping to organize a new worshiping community in Chicago with the Evangelical Lutheran Church in America (ELCA). In 2007, Yehiel Curry began serving as the lay Mission Developer of Shekinah Chapel. Rev. Yehiel Curry was ordained on April 26, 2009, after two years of study at the Lutheran School of Theology at Chicago (LSTC) through the Theological Education for Emerging Ministries (TEEM) program. In 2012, Shekinah Chapel became an organized congregation of the ELCA and in 2013, Pastor Curry received his Master of Divinity from LSTC.

Pastor Curry was blessed to minister God’s word in Liberia & Rwanda, Africa; before 35,000 youth at the Youth Gathering; at the ELCA Churchwide Assembly and various synods throughout the U.S.

On June 8, 2019, Rev. Yehiel Curry was elected to Bishop of the Metropolitan Chicago Synod.

Rev. Yehiel Curry serves as a board member for Rescue, Release and Restore, Inc. NFP (RRR) – a mentoring organization with programs in six cities. RRR focuses on conflict resolution, rites of passage and cultural expression and houses the SIMBA/ Safe in My Sisters’ Arms (SIMSA) camps for African-American youth and the MYLA Camp – a multicultural leadership camp in partnership with Living Water Ministries in Michigan.

Rev. Curry is a past contributor to an ELCA worship resource, Sundays and Seasons and has authored Bring them in, train them up and ship them out and Rods and Blessing for other ELCA publications.
Rev. Curry is the recipient of:
• The Ark of St. Sabina – Dream Maker Award
• Southsiders Organized for Unity and Liberation (SOUL) – Leader of the Year
• Metro Chicago Synod AA strategy team – Spirit of Timothy Award
• Rev. John Steinbruck – Leadership Award
• Lutheran School of Theology at Chicago – Distinguish Alumni Award
• ELCA Youth Ministry Network – The Tom Hunstad Award

Pastor Curry’s life’s journey informs and influences his apprenticeship model of mentorship which maintains that you should make a friend before you try to make a member because it’s easier to quit on a denomination and harder to quit on a friend.